A sign for the Port of Walla Walla’s Burbank Industrial Site at the intersection of Gateway Drive and South 2nd Street in Burbank, WA. The site and nearby Business Park are attracting millions of dollars in investment. Bob Brawdy bbrawdy@tricityherald.com

The first purchase is from McEachen Electric at $240,699 for a 2.2 acre lot at the corner of 2nd Avenue and Gateway Road. They’ve also asked for right of first refusal for a neighboring lot, which could lead to a future expansion.

McEachen plans to invest about $2 million, which includes construction of a 12,000-square-foot metal building to be used as a warehouse and offices for 12 employees.

They plan to invest $1.2 million, including building a 4,000-square-foot building to be used as a warehouse and office. They’ll have an estimated 20 full-time employees working out of the site.

The third purchase is for the adjacent lot, also being bought for $211,701 for 1.62 acres, by O’Brien Construction Company.

They plan to build a 6,000-square-foot building for a warehouse and office. They plan to invest $1.5 million and will have 20 full time employees. 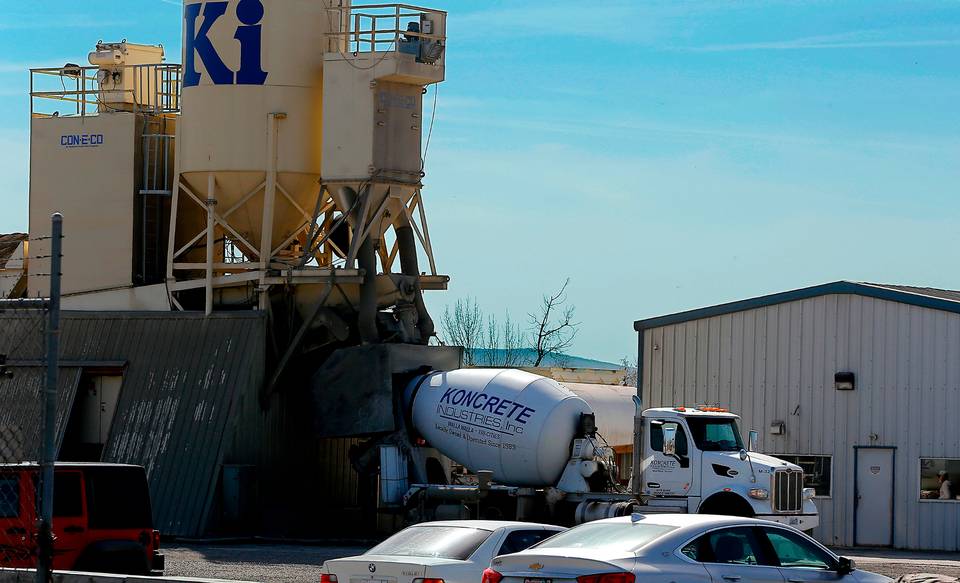 The port commission also approved a land lease at the Burbank Industrial Park for Koncrete Industries.

The regional concrete producer, which is already one of their largest tenants, wants to lease a nearby lot and build structures to house equipment.

The structures would have two shipping containers supporting a curved roof, and would be built in phases over several years.

The land lease will start at about $1,400 annually and go up as they add more structures. It would top out at about $12,500 per year with four phases of equipment storage totaling 48,000 square feet.

Once the land sales are closed on, the contractors will have to submit plans for permits for the warehouse and office structures.

O’Brien Construction Co. of Kennewick was the general contractor of an 18,000-square-foot Grocery Outlet Bargain Market in Richland, WA. The Market opened on March 24 at Vintner Square, and employs 30.

The newest Tri-City Grocery Outlet is owned by independent operators Nikki and Mike Sims and is at the west end of Vintner Square, the Target-anchored shopping center owned by Browman Development.

Its spot next to Party City was the last major development site at Vintner Square.

As you all know,

Due to COVID-19, there is a shortage of N95 respirators. Hospitals, testing centers, first responders, and care takers are in desperate need of these masks in order to protect themselves from the virus they are working very hard to stop.

As members of the industry that is the largest consumer of these respirators, The President has called on us to assist by donating N95 respirators to health care facilities.

Because of this, O’Brien Construction Co. will be hosting a respirator drive through 3/27. All masks will be donated to local medical facilities and testing centers in order to protect the Americans who are putting the health of others before their own. If you would like to donate, please drop masks off at our office located at 501 N. Quay St., Suite C-101 in Kennewick, between 3/19 and 3/27.

Tony Fisher, Owner and Founder of FCO – Fisher’s Catch Outfitters Guide Service, has graciously donated a guided fishing to the company or person who donates the most respirators. This guided fishing trip will be for up to six (6) people.

The Three Rivers Soccer Club exists to promote the development of youth in the community through participation in athletic competition. For more information visit www.3rsc.org.

O’Brien Construction Co. Inc. of Kennewick is the general contractor for a new Del Taco restaurant under construction at 155 Wellsian Way in Richland, across from the north entrance of Fred Meyer.

The Hill Companies Richland LLC of Boise, Idaho, applied for the building permit, which was issued May 21.

The restaurant will be 2,468 square feet, with capacity to accommodate 86 people. It’s adjacent to the Richland Goodwill store.

The nearest Del Taco is in College Place. The company website says it has 580 locations in 14 states.

TRI-CITIES, WA – We see drones being used for almost everything today; from police work to wildfires, and now even construction. Crews are using them to mark progress at work sites. Reporter Jaclyn Selesky found out how they’re changing the construction industry.

“I think we’re hooked,” said Zak O’Brien, vice president of O’Brien Construction. “I can pick up the phone and within a day or two I can be analyzing that data in my office with my team.” O’Brien started using drones on his projects about two years ago. He has sites in both Washington and Oregon, so being able to get real-time aerial footage within hours has been a game changer.

“The three main factors that attracted us to drones technology was speed, cost and flexibility.”

The drones collect data, track the project’s status and a whole lot more that crews on the floor can’t do. Justin Coronado is the owner of UpAngle, a drone service in Richland. He says he has watched drones explode into almost every industry, including construction. “Before contractors had to hire helicopter pilots to come out and do that,” said Coronado. “You’d only see it being done on really, really big expensive projects and now the small contractor has the same ability to bring that same type of reach and marketing power to his own company.”

One of the many things Coronado’s company does is create time-lapse videos to see the project from beginning to end.

“The progression of a project site is really cool to see from when it goes to bare earth, just the dirt and all of a sudden you have steel being erected.”

(Kennewick, WA) O’Brien Construction has been utilizing the technology of using a drone on job sites in multiple ways. In one way, drones are being used to get an aerial view for inspections of a site before the project begins. This footage is used to show the management team the layout of the land, where to place material, the access points, etc. Drones are fitted with high definition cameras that allow the company to capture video footage and images that can be viewed by the construction team and the owner. This technology helps O’Brien be more efficient, save time and money on each project. For more information contact Mickel den Hoed

(Originally Published in Tri-Cities Business News, 9/2017)
“Construction is underway on the Vista III warehouse in Kennewick. The first 40,000-square-foot building will be completed by end of year. A second is expected to be finished in March.”

A new warehouse is under construction in the Vista Field Industrial Park in Kennewick will look similar to four others nearby. O’Brien Construction plans two warehouses, totaling 80,000-square-feet of space, called Vista III north of Quay Street, around the corner from its other warehouses that have been in place for a decade. Owner Tom O’Brien said each warehouse is worth about $2 million.

The first 40,000-square-foot warehouse in Vista III on West Hood Place is targeted for completion by the end of the year, with an identical second building next door scheduled to be completed by the end of March. O’Brien has two identical buildings in King City as well.

He said Vista III is the third phase of his vision for land originally purchased from the Port of Kennewick. “I gambled and it paid off. So I gambled again and it paid off. I have faith in the Tri-Cities and I have faith in Vista Field,” O’Brien said. He bought 15 acres from the port a decade ago, with the expectation of future success. Tenants of his current warehouses mainly deal in distribution and wholesale, but also in retail.

“I believe Vista Field is the hub of the Tri-Cities.”
Tom O’Brien, owner of O’Brien Construction

Camp Patriot is a 501c3 non-profit organization founded by Micah Clark of Richland, WA. They have a mission to empower and thank wounded and disabled military veterans of all generations though outdoor programs.

“Camp Patriot is so very appreciative of the support that O’Brien Construction Co. has graciously given them this year. While preparing for the 6th annual Camp Patriot 4th of July Fun Run, we approached OCCI to see if they had any ideas on a tress system at the finish line. We had a system derived from 5 gallon buckets, cement, and 10-ft. poles, but it had zero resistance to any wind. They were so quick to enthusiastically respond, saying they will figure something out. Within a few weeks they had found a beautiful sturdy tress system that they purchased for us. It looked fabulous at the finish line. They were so supportive of our event and even took part with their families. We are very thankful of their support.” ~ Janet Wilson, Race Director, Camp Patriot Fun Run

“We’re still doing what made us such a strong construction company in the region. Our team works with our customers to find out how their business works, and we design a facility around that.”